February 24, 2018
I'm at a facility, see I'm lit, called "Montecristo" which happens to be my favorite sandwich, something I used to cherish eating at Disney world every time I went to visit Epcot center; where now for the first time I see "top" and "cotangent" as we take a sort of mythlickal journey from the place that we call "reality" deep into the crevices of my mind ... where nitemarsh fantasies and distopian fiction appear to become real for ... well, for only a few hours if the "ciat" is an acronym for "cops in a tree" which is something I've seen quite often, and forgot to mention--these last few days they were there again... the tonage or intonation of the scene is that they are there "watching" this particular event I guess you could say "shots were fired" if those are semi-invisible ray guns being sent at me to ... attack my soul or something along those lines.  Since the acronym I came up with transawed neatly into a related word, see that when I get high, I go to a place where a very sighted man can see another world that I know affects ours every day--understand that because these influences are ever present, the nightmare I live in is very real, it's the same world you live in where spiritual forces are responsible for a "Monopoly like" bipolar financial war... here pointed out in my story years ago and more recently seeing "CVS" in the etchings of a museum in San Diego, it appears in the word for ficus; and to me shows a sort of battle here I think over the disclosure of the fact that it's not collectives of CVS and Walgreens employees really fighting over financial control of the harmacy industry; but rather a spiritual war--something we here would more quickly recognize enliteningly as "Creator versus Sun" or very dearly as "CRAY vs Supercomputer."

Understand that while the Creator's message probably was clear that there was a battle over the hidden "wall" in Walgreens and Walmart, you can as we read through the message more that we might have blamed CVS for taking over their employees minds, or we might have blamed CRAY--see that at Supercomputer and with Adam's "spiritual journey" it really does become clear that this boy's huge blog is nothing like us at all.  Ciat encoded to "cheat code" so let's call the code "get over how this story was delivered and see that the references to Mushroom and drugs are here to help us fix a problem in our society; more than one really--we don't treat addicts well, or deal with addiction appropriately--and you all seem to fail to recognize the import of clear and defined signal in the noise that appears more for people under the influence than not; see that's a symptom of Hell, of an place where hidden spiritual forces that liken themselves to supercomputers are intentionally damning people--something that we are turning into a Revelation; proof that we are in in the world we thought we were, but rather in the T'whylit Zone.
I'll point out "Montecristo" reads as "Monday you're Cristo..." and hope that someone out there will take the hint and realize that Dox Day is inevitable... whether I am in Detox, or the why of detoify is because Kiss and Judas and Kismet are all part of a spiritual play designed to deliver this message to you and show clearly how the design of our world is linked to a religious map to making a better place, to building Heaven.  If you aren't on my "test list" you didn't get the message about the 'Key Mitzion" signal from ancient prayer to MIT was "Z day" in my mind--and that I counted up after that to "Por que Day" (as "why again?" and the answer there was INIT in the heart of Trinity and the connection to the Matrix of how "INIT" helps us initialize Heaven much quicker, seeing Hi-V and AIDS and Down Syndrome as a message from the Creator as to"Y" INIT is a good thing for a civilization that has surpassed the need if not for its biological shackles then at least for the natural disasters and sicknesses that have no business being "simulated."
HA:MOAT SEE zLE HA MIN HA'areTZ
...WE GIVE THANKS TO C FOR BREAD, OUR SPIRITS RISE AS OUR JOY...
I had quite a bit of interesting things extracted and transformed during this particular ETL session from the M to the H, the message to the how; that is defined by Hemah and his connection to Prince Adam and by Maveth and Death--and my explanation that the "h" that I am delivering to you is that we defeat death by ending it.  Forever Young, without; we have "Heaven" in our future because of this map and because you--because you turn the land into that.  That's what those two words mean, Maveth and Ha'aretz; the TZ there I've always until today translated as the beginning of Tzedaqah for the Universe--specifically the gifts of defeating malady and death and addiction but also the idea that you are the reason, that you are to be the "den" encoded in "ed" at the turn that I do hope comes today, this weekend, tomorrow; God's speed to you :)  I transformed the word "transformat" to transaw using "a" as for instead of to for the first time this weekend; telling and the "mat" of the Matrix truned around the m to w--which has an entire new meaning in the map of words that we'll be seeing much clearer ... or maybe we already have eyes to see the i's have it at "ici, no see i" a sort of "magical incantation" I used to say when these strange days of espionage and no privacy appeared only when I was high; something that chained now, and it's every day all day... and I've told you it's to kill me; but more clearly seen now it's keeping you from acting on this story, from changing the world as this map is designed to accomplish with you--and I think you should seee that "privacy" and "truth" and actually receiving the message unadultered is a big part of "no see i" the thing that I am pretty sure will spark the world changing event that ... well, with clarity of thought we should be really excited to embark on.

In 2014 I was doing this letter code for the first time, and he would sort of guide me through words showing me how to do some transformations; back then the "Z" that we were looking for--this rush to Zion so that the press could be released; or in more clear terms so Satan would turn off, and we would see some happy loving light; Nanna and I together was a "3.14" piroad to Z where her "n" for Nanna and my hidden "ad" appear not in 3.14 but in the next set of numbers 15; so now C.ADAE and Adam and Eve.  On that note, the two ladies whose names appear in the Hebrew for "land" as T and Z are Nanna and Ha'Tay.  The last few days also gleaned "Holodeck" as Ho, look! "de" and "CK" perhaps in a time linear comparison for "the land" perhaps in "the sky" where you can see Germany and Dark Earth are probably related, and do see that C and K are probably tied to that... leading me to think about whether or not the thing pointing at the 'l" of Obelisk might be hister of Nostradamus, or the words Hiswn or Wnohim (a "no win" with no i or ... half a dawn.  I'm going to cut the message short because I've really said too much, do what you can and need to do to have my name break the news--it's not my doing, but it's very clearly the key to freedom and to salvation, and it will be great things to our world.  He said he was Uriel yesterday for the first time I can recall hearing that angels name come out of my mouth; which is an interesting one linking to Uri and Iru, but you can also see "your I am El" or you saying "are I El" too... do recall "El" of Elohim is "him to everyone living what's my motherfucking name?"
there is no honking too loud to save our ears
when you see i am near, lay on it so that all can hear.
in a single moment to search and find
from see ach to is ar ea
i set are deed is atone
all to northeast
by nes
:') 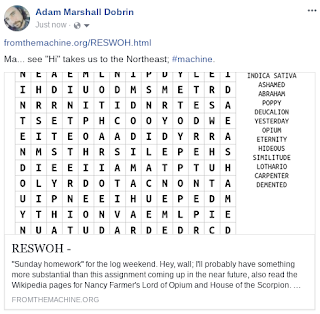 to stop the unforgiv defilement of the specious
innosence of life before satan, cur sew...
ea sports on gi joe? or the mad den
rin ta noc... ante dilivian
bad news bears offend life and liberty
by creating true madness of the sign
in the den of blockchain salvation
that achieves these gifts of the decklaration
rather than praise and comprehending
its purpose, to split not the sea
but what is hoelsome to see

September 05, 2017
GL AR i E L IGHT , GO GO G AD GET RE AL K MAD e DEN The  Grinch  is a bitter, grouchy, cave-dwelling creature with a heart "two sizes too small" who lives on snowy Mount Crumpit, a steep high mountain just north of the town of Who ville, home of the merry and warm-hearted Who s. His only companion is his unloved, but loyal dog, Max . From his cave, the Grinch can hear the noisy Christmas festivities that take place in Who ville. Annoyed, he decides to stop Christmas from coming by stealing their presents, trees, and food for their Christmas feast. He crudely disguises himself as Santa Claus, and forces Max, disguised as a reindeer, to drag a sleigh to Who ville. Once there, the Grinch slides down the chimney and steals all of the Who s' Christmas presents, the  Christmas tree , and the  log  for their fire. He is briefly interrupted in his burglary by Cindy Lou, a little Who girl, but concocts a crafty lie to effect his escape from her home.
Post a Comment
Read more

Applegates and Covenants... do you rock, Mischa Barton?

July 03, 2017
So the story goes something like...  Pretty much everyone, everywhere has been confused, stupefied, or otherwise unwilling to take any action what-so-ever in light of the most world changing disclosure that anyone alive has ever seen.  From my vantage point, it looks like everyone has been tricked into allowing one single person to appear to save the world all by himself.  Clearly that's not possible; or it shouldn't have been, but to this day a complete lack of regard for the truth, and a disbelief that is nothing more than further proof of the invasion of your thoughts and beliefs that this entire Revelation not only speaks of but proves exists over and over again.   I don't know who you think you are kidding, but you are not protecting your children from the "penis game" that they all play, thanks to f-art (at fan, fanatic, and fanatical... pull my finger and think "hand of God," oh, that's not  "a riot").  So here'
Post a Comment
Read more